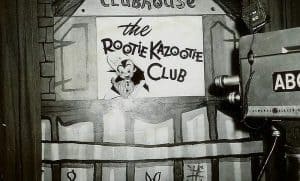 So, let’s talk about my maternal grandmother, or Bubbie, as we called her. One of the earliest memories I have of her is an early evening in 1954 when my family went to my grandmother’s house to see this new-fangled picture box called a television. My grandparents were one of the first families in my town to have one, and I was excited to get a look at this “step into the future.” Programming at that time was limited to a few hours in the evening, so it was convenient to go for dinner first and then gather around the picture box to watch whatever shows would come on.

Of course, there was no color. Everything was produced in black and white with programs being only about 30 minutes long. I remember watching mostly news programs at first – the entertainment shows came later. And, if I remember right, the stations shut down around 10 pm so everyone could retire at a normal bedtime.

The television had a screen of about 12 to 14 inches from corner to corner. When the set was turned off, the screen had a kind of greenish tint that also looked grayish depending on where you were standing when you looked at it. Most of the time it just sat in the living room like a piece of furniture, but when it was time to watch programming, that piece of furniture became the center of attention. 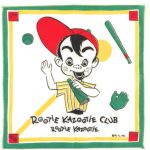 During the 1950’s, television programming expanded with more entertainment shows including ones for children. The earliest program I remember was the “Rootie Kazootie Club” with Rootie, a puppet boy, and several other characters (also puppets) with names like Polka Dottie, Poison Zoomack, and Mr. Deetle Doodle, the policeman who tried to keep the peace. The Rootie Kazootie show was the first kid show I watched, but my favorite was a show called “Winkie Dink and You.” In looking back, this show was way ahead of its time because it was actually “interactive.” Yes, that’s right – interactive. For $.50 (fifty cents) a person could mail in a request for 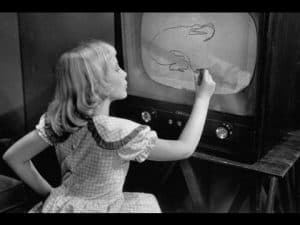 a Winky Dink kit which included Winky Dink crayons and a “magic window” that was a piece of green plastic that actually stuck on the front of the television screen by using static electricity. There were scenes presented on the screen which showed a series of dots, like a dot-to-dot picture. If you had the Winky Dink kit, you could use a magic crayon to connect the dots on the “magic window,” and, voila! The scene was completed, the puzzle solved, or the escape route discovered. Bubbie always had to remind me to keep my crayon on the “magic window” and not on the television screen itself!

Often, I was allowed to watch early morning children’s programs before school, but I had to be dressed and ready to have breakfast while I watched. Bubbie set up a “TV table” for me so I could sit in the big room with my breakfast and have clear access to the television. One of my favorite foods for breakfast was what Bubbie called “Volcano Potatoes,” and I could have eaten them every day if she would make them. This specialty consisted of fried up mashed potatoes piled on my plate in a volcano formation. The “piece de resistance” was the fried egg positioned on the peak of the mashed potatoes with the yolk intact but ready at any second to spill out and run down the “volcano” acting like small rivers of hot (yellow) lava.

I held my breath every time that my grandmother carried that tasty tater mountain, with the egg perched precariously on the top, from the kitchen to my place on the TV table. The game, of course, was to see if the yolk would hold until Bubbie set the plate down in front of me and I did the official “poking” with my fork to create the egg yolk eruption!

Several more memories come to mind when I think of Bubbie and her “Fun with Food” mornings. Hot cocoa made from scratch with marshmallows that we cut up with scissors that had been dipped in water so the white sweet stuff wouldn’t stick – this was another favorite for sure! And her homemade applesauce was something to die for…sliced apples, just the right amount of sugar and water, and a dash or pinch of cinnamon depending on her mood that day. I’ve tried to make applesauce like hers but have never come close to her bar.

Other treats were lemon meringue pie after Sunday dinner where I ate only the meringue and left the lemon bottom for someone else. Fried chicken cooked in a real cast iron skillet had a flavor all of its own. That skillet is in my cupboard now and I still use it for cooking, but my fried chicken hasn’t tasted like hers either. Oh, and, of course, that bit of cooked rattlesnake that I tasted was cooked in Bubbie’s kitchen, but I’m pretty sure she made Granddaddy skin it first. It’s vague, but I think I remember Granddaddy teasing Bubbie when she was cooking the rattlesnake by dropping the rattles down on the hot skillet. They popped and hopped around like jumping beans. Some people laughed; others, of course, didn’t have that same reaction!

Bubbie was a neat lady who was always willing to listen to me. She had a great sense of humor and was usually up for a new adventure if she was feeling good. She had much to do with my upbringing, and I am thankful for having her in my life. What I hope for now is that I can be that same kind of grandmother to my grandchildren and great-grandchildren.