So, if you read last week’s blog about my grandmother, Bubbie, you have probably concluded that she was a good cook. She was also young at heart. One of my fondest memories of Bubbie is the time when she travelled up to Ann Arbor, Michigan to take part in my 21st birthday celebration.

When I was a student at the University of Michigan in Ann Arbor, a fun and special tradition for celebrating one’s 21st birthday had been established at a local restaurant/pub called The Pretzel Bell, or “The P-bell” for short. It was the happening place for a person’s special “becoming legal’ party when turning 21. At some point during a 21st birthday celebration, the folks at The P-bell would ring a huge bell and announce the name of the birthday celebrant, followed by the birthday person climbing to stand on top of the wooden table and then chugging as many glasses of beer as possible!

So, on my very own 21st birthday, the bell rang, someone 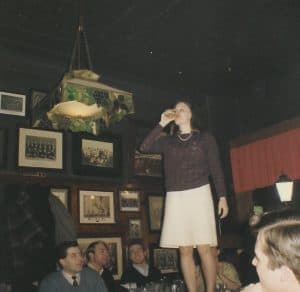 announced my name, and up I went, careful not to step into either of the two birthday cakes that folks had brought to share. Someone handed me my first glass of beer…chug-a- lug! Second glass…chug-a-chug-a-lug.Third glass…chug-a-lug again. That chug-a-chug-a-lugging went on through four more glasses which made the grand total of beers chugged…seven! Yep, seven! And I was still standing on top of the table, although not as confidently as I was at seven beers earlier. At that moment, I was pretty proud of myself for being able to still be standing, still not stepping into a birthday cake or falling off the table into my guests, especially Bubbie, as she was sitting closest to me before the bell rang.

Now it was time for part two of the tradition. Did I mention there was a part two? No? Well, the “drinking on the table” part was only the precursor. In order to be “officially” 21 at The P-Bell, I needed to carve my name into the wooden table for posterity with a pocket knife. Yes, you read that right! Let’s give that person who just chugged seven beers a pocket knife to wield and attempt to carve her name into the table without doing any damage to anything or anyone in the vicinity…Ha! Somehow I was able to get my name etched, although you had to really stretch it to make out the second “g” and the last “r” in “Ginger.” 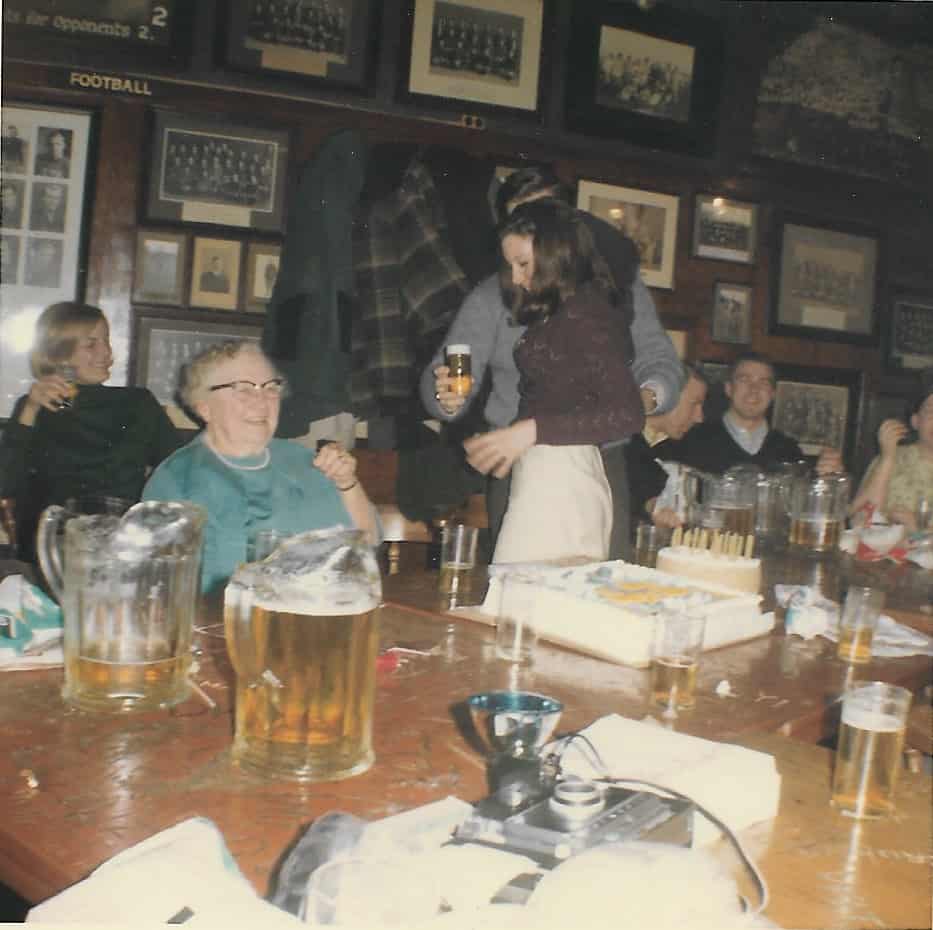 Bubbie was hanging in there with me and enjoying herself. As I know now, being around young people keeps you young at heart and feeds your energy levels. She was having a great time, enjoying two beers and eventually helping me to “carve” the awaiting birthday cakes. One chocolate and one marble, while yummy in their own right, would have been better served followed by a good cup of coffee instead of more beer. But we didn’t let that stop us! Nope! Cake and beer – a great party idea.

As I was writing this blog, another memory popped into my head from times spent with Bubbie at her house. She had one of the coolest washer and dryer sets available at that time, and her dryer played a little tune to alert you when the clothes were done. The tune was “How Dry I Am,” the old drinking song. Sometimes I would run the clothes for another cycle just to hear that little tune again. (You know I’m a little weird when it comes to appliance music if you read my earlier blog titled “My Washer and Dryer.”)

Thinking about what might be representative of Bubbie for her Dream Tree, I picture a big heart for sure. Along with that big heart, I would hang an apple and a lemon (for the applesauce and lemon pie from my previous blog post), a letter “P” with a bell hanging on it, and a big number 21 for my memorable and once-in-a-lifetime event!