Recently, I was sorting through a box of memorabilia from a time in my career when being a girl ‘drummer’ and/or girl ‘percussionist’ was not the norm. In fact, it was far from it during the 60’s and 70’s. While looking through miscellaneous programs and posters from gigs that I played, I came across one specific program that immediately sent me back to center stage in the colosseum in Pullman, Washington.

I had been contracted to play backup percussion in the orchestra for The Rich Little Concert! During the 70’s, Rich Little was very well known, a fantastic comedian, and an amazing impressionist.  He performed in numerous television shows, comedy clubs, and had a standing performance spot at one of the big casinos in Las Vegas. Admittedly, I was excited. Playing backup for a big ‘star’ is a treat!

One of the most fun parts of a gig like this is that you only have 1 rehearsal and are virtually sight-reading the charts. You arrive at the venue, load in equipment (which means to unload the equipment and carry it into the venue), set up equipment, get handed the charts (aka music), and be ready for the ‘downbeat’! In this case, there would be a 2-hour rehearsal, a dinner break, and a show at 7.

The unusual thing about this gig was that I was not allowed to carry any of my own equipment from the door of the venue to the stage. This venue was a ‘union hall’ and because of that, the hired stage hands were required to handle all equipment. And, because most of the equipment I would be playing was big and heavy, and because of the venue’s liability rules, I was blessed with ‘roadies’ of sorts. The truth is that this made me pretty happy. All the heavy schlepping would be done by the union guys, and I just had to stand by and watch. What a great idea, I thought. My own ‘roadies’!

Here is a list of equipment (as much as I can recall) that I would be playing for the gig.

So, I felt pretty good as I carried my one mallet bag into the hall.

About an hour later, an announcement came over the loud speaker that it was time for the percussionist to come to the stage and start setting up. Oh, boy, I thought, this is going to be a fun gig.

So I made my way up onto the stage, hoping to find all my stuff and start building up my set. There was stuff everywhere…………Now, those roadies were great schleppers, however, not so great at caring where they put everything down. As long as it made it to the stage, they had done their job. As long as there was an empty spot somewhere, they would just put the case down. It didn’t really matter to them if the bongos were in the trumpet section, or the vibe cases were partly off stage in the wings and partly in the string section. The stage was a maze of black instrument cases, and it was up to me to get all of my ‘shtick’ together (so to speak.)

I located the vibe cases first and went to work. I had the frame built when another announcement came over the loud speaker asking the percussionist to come to the stage and start setting up. Hmmmm, I thought. I stood up, looked out at the empty venue, and said, rather loudly, “I’m here.” Since the voice had come from somewhere above, I decided I should probably respond again, aiming my “I’m here” somewhere towards up. I did that.

I continued working with the equipment. I got the vibes put together, went to work on the xylophone, and then bells. There was still more than half of the setup to go when, again, the announcement came over the loud speaker asking for the percussionist to come to the stage. Now, during this whole time, I was the only person on the stage, and the only one doing anything with the percussion equipment. Maybe the loud speaker is blind, I thought…. Again, I looked up, aimed my face to the rafters somewhere hoping to answer in a direct line to the loud speaker. “I’m here!” and again, more emphatically, “I’M HERE!”

I waited a few seconds to see if there would be any response. There was not. I continued to put stuff together.

Not long after the 3rd announcement, I heard footsteps coming up the access steps to the stage. They came closer, I stopped what I was doing, looked up, and saw a guy who, as it turned out, was the orchestra manager for the Rich Little Orchestra. “Hello,” I said.

“What are you doing up here?” he bellowed. “You are not supposed to be up here.” I just sort of looked at him and said, “but I’m putting the percussion equipment together.”

“Well,” I said, “I heard the first announcement for the percussionist to come to the stage and start setting up. So, that’s what I did.”

So, let me stop here for a moment. Thinking that I had been presented with a special opportunity here, I just stared at him for a second. I had hope that he would ‘get the picture’! But, alas, no. He did not.

By this time, I was getting annoyed. But not annoyed enough to not have a little fun. So, I answered, “Yes,I do,” and then grabbed the bongo case and started putting the stand together. I had decided to let him continue to wonder where the percussionist was.

“Well,” he said, “If you know where he is, go find him and tell him to get out here and get busy!” He turned and walked away. Finding this not only annoying, but also amusing, I decided to just keep working on my ‘stchick’ and wait for whatever might happen next.

Another 15 or 20 minutes passed. I had most of my setup done and was putting the cases off stage where they would live until after the concert. I was walking back on stage when my body sent me an alert. You know, one of those feelings that says “it’s time to go!” Literally – I needed to find the restroom ‘stat!’

Apparently, while I was off stage taking care of business, Mr. Orchestra Manager came back looking for the percussionist. By this time, other musicians were finding their places on the stage and preparing for rehearsal. Mr. O. M. asked one of them, ‘Where is the percussionist?’ Their answer was that I had gone looking for him and would be back in a bit.

So, here we are, 10 minutes before downbeat, all the musicians are in their places, and Mr. O.M. is a bit frantic.  I overheard him say to the director that if we didn’t have a percussionist, rehearsal would have to start late and he would have to find a sub. What the hell!?

As I stood behind my instruments, I looked over the music so I could be as prepared as possible. I noticed Mr. O.M. coming toward me. “Where is the percussionist?” he yelled. “I don’t know what we’ll do if we can’t find a sub by tonight.”

OK, so time to ‘fess up’. “I’m the percussionist,” I said. He just looked at me. Realizing that this concept might not be getting through to him, I repeated, louder, that I was the percussionist. Other musicians were now looking at us and wondering what all the ‘hoo-haa’ was about. 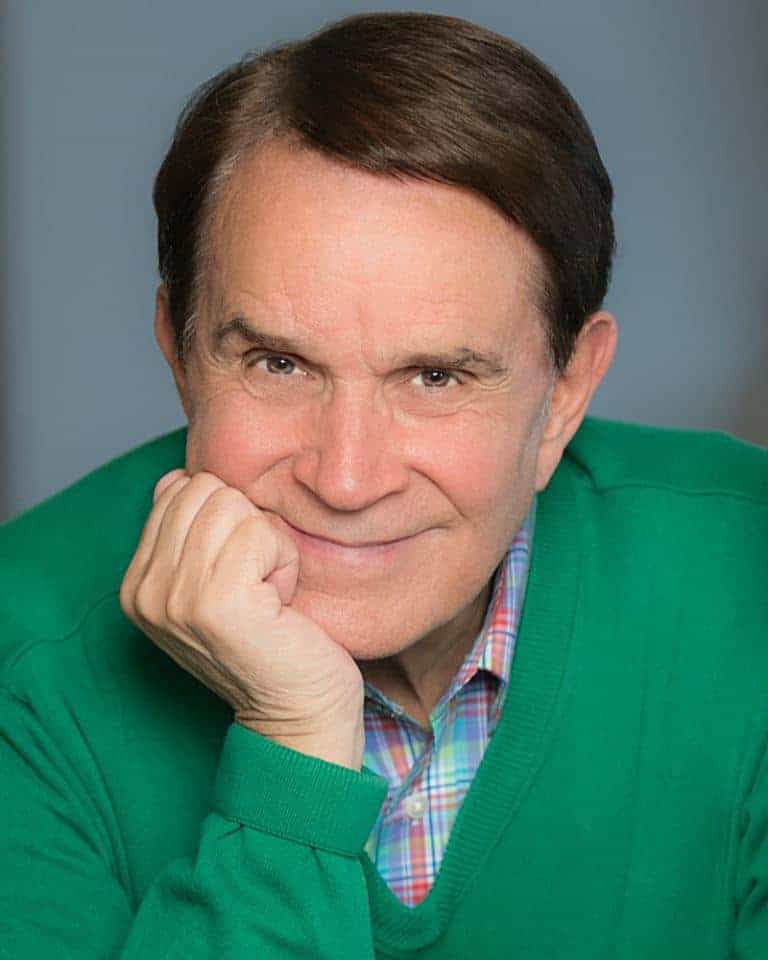 It was a wild experience playing backup percussion
for Rich Little in Las Vegas!

Now that we are almost to the end of this story, I can tell you that what Mr. O.M. actually said was NOT just “But, but you’re a girl!” What he did say (and I remind you that this is a true story) was, “But, you’re a girl! You’ve got boobs!” His eyes locked onto my chest.

Please understand that, back in the 70’s, my choices for a response had not yet been expanded by the 80’s, 90’s, or even the ‘Me Too’ movement. So, this clear bit of ‘sexual harassment’ as it would later be called, didn’t bother me too much. After all, I was getting to play for Rich Little (and so were my boobs).

The rehearsal happened with no problems. The show was great and Rich Little was an outstanding entertainer. The one thing that I found amazing about him, other than his great talent, is that he learned all of our first and last names at the beginning of rehearsal, and then, at the concert, introduced each of us by name and thanked us for playing for him.

Personally, I had fun playing this gig. I was fortunate to have gotten the call to play, and I still think of this as one of the highlights of my earlier years. And, rather than look at this experience as negative and as ridiculous sexual harassment, I’m choosing to look at it as a survivor and as one of the few females that ‘took it’ so that the doors of the percussion world would be more and more open to women.

I have had many opportunities to play back up for stars of stage, screen, and television. So have my boobs. Apparently, we make a good team and should really try to keep our act together!