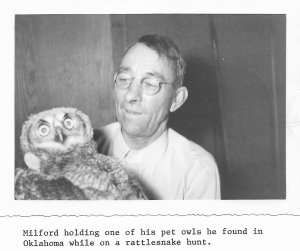 This is the first in a series based on my previous blog post, “Dream Trees,” where, in my dream, I saw a roomful of Christmas trees decorated with ornaments and items that represented specific people. Instead of Christmas trees, however, each post in the series will focus on a Dream Tree to represent one of my ancestors. This first story features my maternal grandfather.

So, let’s talk about Milford Willis Hartmann. I grew up calling him “Granddaddy” until I was 12, when he suffered a series of strokes which caused him to pass away on Thanksgiving Day of 1959. What I remember most about his funeral was all of the flowers that filled up the sanctuary at the First Presbyterian Church. Hundreds and hundreds of flowers graced the altar, the floor around the altar, part of the choir loft, and the end of every pew down the main aisle in the sanctuary. It was all so beautiful in a sad way, and I remember my mother taking photos of all of the arrangements so she would be sure to send a thank you note to everyone who had sent them. The church smelled like a flower shop, and I haven’t been to a funeral since where there were so many flowers.

My most vivid memories of my grandfather are the baby owls he found and raised into adulthood, the wooden box crate full of rattlesnakes from the Waynoka Rattlesnake Hunt in Oklahoma, and my freedom to wander through his machine shop after hours to look at the lathes, drills, and other machinery. The machine shop had a special smell – that of metal, oil, ground steel, and some coal dust – a smell unique to machine shops and cast iron foundries. If I am ever visiting one of them, the smell triggers me right back into my grandfather’s shop. Also, my grandfather had a reputation for having the cleanest machine shop in the state. I could walk on the floor of the shop to look at all of those machines and yet come out with clean shoes. Not a speck of black dust at all. 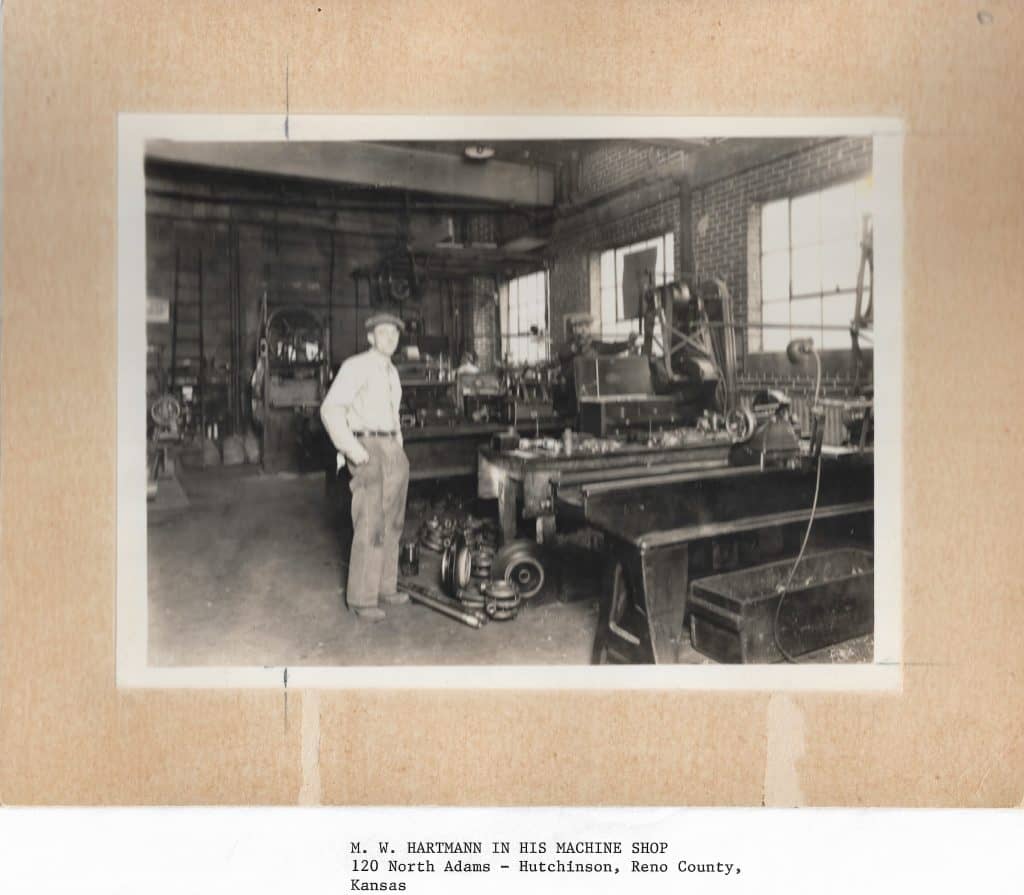 In 1954, my grandfather went on the Waynoka Rattlesnake Hunt in Oklahoma, where he and his friend found a pair of baby birds snuggled in a nest down in a rock cave. They pulled the baby fur balls from the nest and played with them for a while, all the time wondering if the mother bird would return to the nest and harass them for taking the little white fuzz-balls away from their safe surroundings. No mother bird appeared, and when it was time to go, the hunters placed the babies back into the nest before they left.

My grandfather kept thinking about these baby birds for the next week and decided to return to Oklahoma to see if they were still in the nest and doing okay. When he arrived, the birds were still snuggled in the nest, but there was no sign of the mother bird. The babies had not been fed and were in distress. After deciding to take the babies and try to keep them alive, he put them in a box and drove home. Granddaddy built a cage for them in his garage where they spent the daytime hours sitting, sleeping, and eating raw beef and rabbit. At night, he would close the garage door and open the cage so the little ones could fly around and exercise their wings. After about 2 weeks, my grandfather discovered that the birds were actually North American Great Horned Owls and not eagles like he had first suspected. 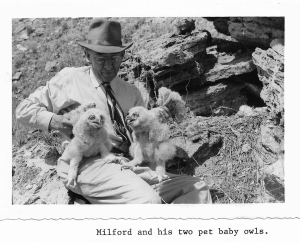 Over time, these birds grew into healthy adults who developed sharp beaks and even sharper claws. My grandfather realized that the owls were dependent on him for food and water, and he was afraid they might not be able to survive in the wild. He offered the owls to the local zoo, but that didn’t work out. So, he decided to keep them for a while to make sure they were strong, healthy, and well into adulthood before took steps toward their independence.

In my childhood memories I do recall that he had named them, but I just can’t remember what they were. Mutt and Jeff maybe? Dr. Jekyll and Mr. Hyde possibly? Or, the Owl and the Pussycat? … I’ll pick this one for now. At least the two birds were friendly and enjoyed playing with both my granddaddy and Bubbie, my grandmother. 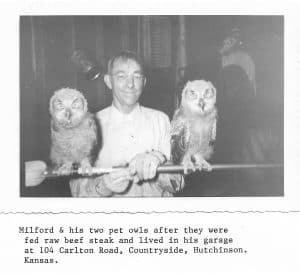 Eventually, caring for two full grown North American Great Horned Owls became too much for my two grandparents, so they decided to load them up in the car and take them out to the country where they could be cage free and fly high! It was a little sad when my grandparents returned home and saw the empty cage. Too quiet… and my grandfather kept that cage open and in that garage for several months after the owls were gone.

According to this much-told story, a few years later the two owls returned to the housing development and appeared to be looking for their ‘companion.’ Unfortunately, my grandfather had passed away during their absence, and they were not able to enjoy a reunion with their caretaker.

So, the first decoration to go up on my granddaddy’s tree will be a North American Great Horned Owl – or maybe a pair of them. Maybe this will count as the “reunion” they had been looking for.

Nest week you’ll read Part 2 of Granddaddy’s Dream Tree story. In the meantime, think about diamonds and scales and, maybe, a rattle or two… 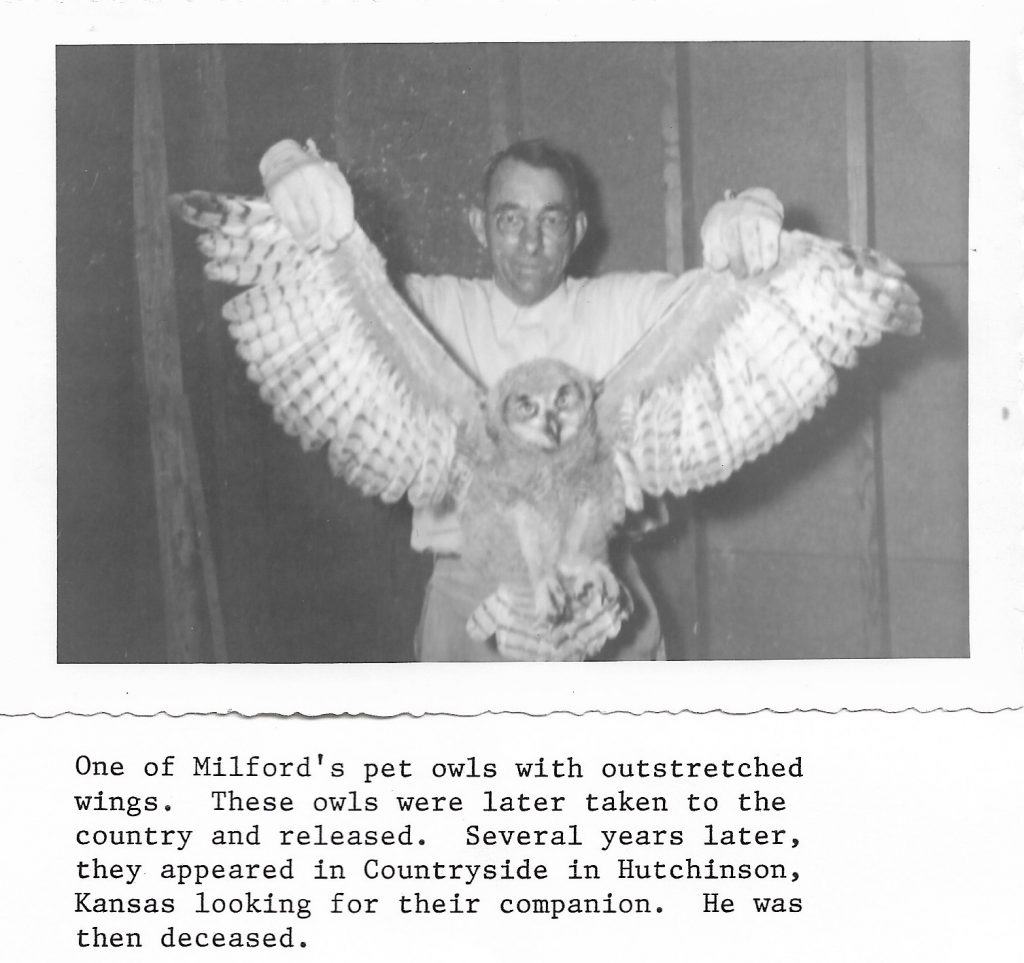